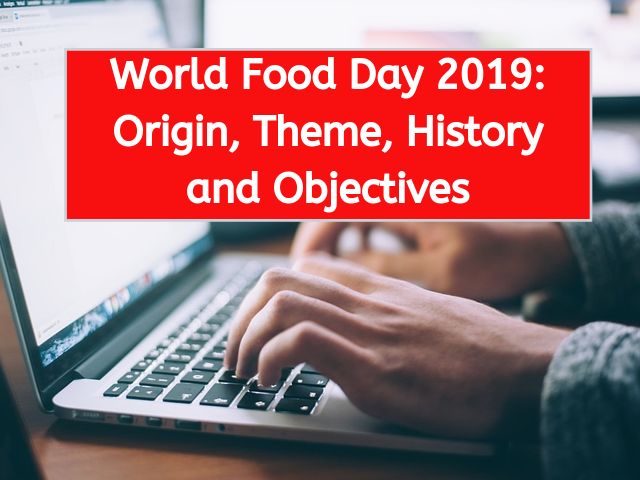 World Food Day is celebrated every year around the world on 16 October in honor of the date of the founding of the Food and Agriculture Organization of the United Nations in 1945. The day is celebrated widely by many other organizations concerned with food security, including the World Food Programme and the International Fund for Agricultural Development.

The World Food Day theme for 2014 was Family Farming: “Feeding the world, caring for the earth”; in 2015 it was “Social Protection and Agriculture: Breaking the Cycle of Rural Poverty”; in 2016 it is Climate Change: “Climate is changing. Food and agriculture must too”, which echoes the theme of 2008, and of 2002 and 1989 before that.

Collective action across 150 countries is what makes World Food Day one of the most celebrated days of the UN calendar. Hundreds of events and outreach activities bring together governments, businesses, NGOs, the media, and general public. They promote worldwide awareness and action for those who suffer from hunger and for the need to ensure healthy diets for all. Make #WorldFoodDay your day – share your individual action for #ZeroHunger or join the call by developing a group event or activity.

Share the #WorldFoodDay video on social media to inspire action for healthy diets!

World Food Day (WFD) was established by FAO’s Member Countries at the Organization’s 20th General Conference in November 1979. The Hungarian Delegation, led by the former Hungarian Minister of Agriculture and Food Dr. Pál Romány, played an active role at the 20th Session of the FAO Conference and suggested the idea of celebrating the WFD worldwide. It has since been observed every year in more than 150 countries, raising awareness of the issues behind poverty and hunger.

Since 1981, World Food Day has adopted a different theme each year in order to highlight areas needed for action and provide a common focus.

Most of the themes revolve around agriculture because only investment in agriculture – together with support for education and health – will turn this situation around. The bulk of that investment will have to come from the private sector, with public investment playing a crucial role, especially in view of its facilitating and stimulating effect on private investment.

In spite of the importance of agriculture as the driving force in the economies of many developing countries, this vital sector is frequently starved of investment. In particular, foreign aid to agriculture has shown marked declines over the past 20 years.

The theme of World Food Day 2019 is “Our Actions Are Our Future. Healthy Diets for A #ZeroHunger World”. It focuses on tackling global hunger. Due to globalisation, urbanisation and income growth, our diets and eating habits are changed. Instead of seasonal, fibre rich food and plant based food we are shifted to refined, starches, sugar, fats, salt, processed food, meat, etc. It has been seen that in urban areas time spent on preparing food or meals is very less because people these days rely on ready mate food, supermarkets, fast food, street food, etc.

Due to unhealthy diets and sedentary lifestyles obesity in people is increasing in developed, low-income countries. According to FAO, 670 million adults and 120 million girls and boys of the age group 5 to 18 years are obese and 40 million children under 5 are overweight. Around 820 million people suffer from hunger.

What is a healthy diet and its importance?

A healthy diet meets the nutritional needs of people by providing sufficient, safe, nutritious and diverse foods to lead a good life and reduce the risk of disease. We can’t ignore the fact that nutritious diets at times are costly and is not affordable to many people.

Do you know that an unhealthy diet is the main risk factor for several deaths from non-communicable diseases (NCDs) like cardiovascular diseases, diabetes and cancers? Nearly one on three people is affected by obesity and some other forms of malnutrition. No doubt, there are solutions to reduce all forms of malnutrition but global commitment and action to be taken are required with full commitment.

The combination of good nutrition and healthy weight reduces the risk of chronic diseases. If you eat healthy, nutrients will reach to your body and you will remain healthy, active and strong. Physical activity with healthy diet also plays an important role.