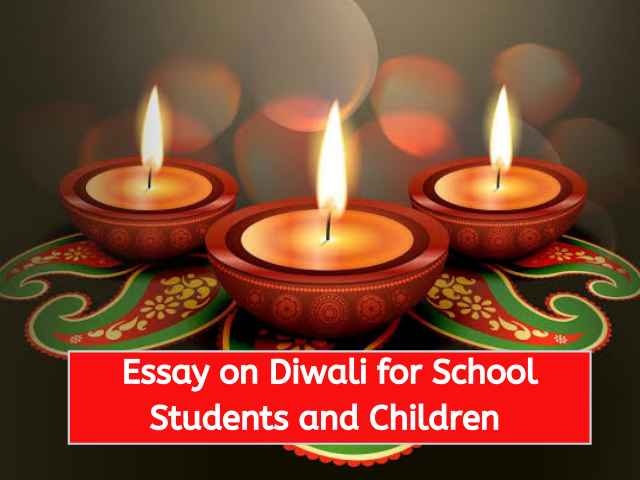 ‘Deepawali’, the festival of lights, is one of the most widely celebrated festivals of Hindus. It is celebrated with great enthusiasm throughout India and in some other parts of the world. With this festival are associated many lores and legends. It marks the victory of Lord Rama over Ravana and home coming of Lord Rama after an exile of 14 years. As a matter of fact, this festival is the symbol of victory of the forces of virtue over the evil.

New clothes are worn by everyone. Children and teenagers dress in their most glittering and dazzling clothes. At night, fireworks and crackers are also let off. The bright flames of the fireworks present an exquisite sight in the dark night.

The festival wears a lovely look. Everyone is well dressed, gay and mirthful. Some celebrate the day in the most enthusiastic manner. At night, the people decorate their houses, with lights, diyas, candles and tubelights. They eat, drink and enjoy the evening with crackers. The cities and towns are immersed in light and sound of the fireworks. Apart from houses, public buildings and government offices are also lit up. It is an enchanting sight to behold.

Hindus worship Lakshmi, the Goddess of wealth, on this day. They offer prayers so that Goddess Lakshmi may visit their houses and bestow prosperity.

Deepawali is the festival of the whole country. It is celebrated in every nook and corner of the country. So, this festival also creates a sense of oneness among the people. It becomes the symbol of unity. India has been celebrating this festival for thousands of years and continues to celebrate it even today. All Indians love this festival.

Diwali is one of the most popular festivals in India. It is also called the festival of lights. It is a holy festival for the Hindus. On Diwali people lit up their houses, shops etc. with lanterns, candles, diyas, and decorative lights. Lord Ganesh and Goddess Lakshmi are worshipped and people burst firecrackers. People distribute sweets and decorate their houses on Diwali.

Diwali’ is one of the greatest festivals of Hindus. Diwali is also called as Deepawali. ‘Deepawali’ in Hindi means a row of diyas.

Diwali is the festival of lights. It falls in the month of ‘Kartik’ according to Hindu calendar. In Diwali almost every house and street is decorated with lamps, and lights.

It is celebrated when Lord Ram, Sita and Lakshman returned to Ayodhya after 14 years of exile. People of Ayodhya welcomed them with lighted oil lamps. That is why it is called the ‘Festival of Lights’.

On the day of Diwali everyone looks happy and they greet one another. Children buy toys and crackers. Shops and houses are got clean and painted. At night people worship Lakshmi- Goodess of wealth.

Diwali’ is one of the greatest festivals of Hindus. Diwali is also called as Deepawali. ‘Deepawali’ in Hindi means a row of diyas.

Diwali is the festival of lights. It falls in the month of ‘Kartik’ according to Hindu calendar. In Diwali almost every house and street is decorated with lamps, and lights.

It is celebrated when Lord Ram, Sita and Lakshman returned to Ayodhya after 14 years of exile. People of Ayodhya welcomed them with lighted oil lamps. That is why it is called the ‘Festival of Lights’.

On the day of Diwali everyone looks happy and they greet one another. Children buy toys and crackers. Shops and houses are got clean and painted. At night people worship Lakshmi- Goodess of wealth.

Diwali or Deepawali is also called the ‘festival of lights’. The festival is celebrated across the country with great joy. There is a mythological story behind the celebration of Diwali. It is believed that on this day Lord Rama was returned to Ayodhya after defeating Ravana.

Diwali is a very special festival for the Hindus. People start the preparation a week before to celebrate Diwali. Houses, shops, streets are cleaned and diyas, candles or decorative lights are illuminated. Firecrackers are burst and children get lots of joy. People wear new clothes and distribute sweets on Diwali. Lord Ganesh and Devi Lakshmi are worshipped for prosperity and wealth. Rangolies are made and diyas are placed there and Devi Lakshmi is worshipped.

There are some disadvantages of Diwali too. In Diwali, people burst crores of firecrackers across the country and that pollute the environment. On the other hand, people who are suffering from lungs problem, smoke allergy, asthma suffer a lot during Diwali. Burning crackers also cause noise pollution and it also harms the environment.

Diwali, popularly known as Deepawali is an important festival that is celebrated with immense enthusiasm across the country. It is also called the festival of lights.

As per Hindu mythology, it is believed that on this day Lord Rama was returned to Ayodhya after defeating Ravana. People of Ayodhya lit up diyas to welcome Lord Rama to Ayodhya. Actually, the festival Diwali symbolizes the victory of good over evil.

Today Diwali is celebrated with great pomp. People clean their houses, shops before Diwali. On Diwali, rangolis are made and people worship Lord Ganesh and goddesses Lakshmi for prosperity and good luck. Firecrackers are burst and sweets are exchanged by people with their near and dear ones.

No doubt Diwali is a festival of joy and fun. But in the process of Diwali celebration, we cause some to our environment too. After Diwali, we can see an increase in environmental pollution. The smoke emitted from the firecrackers not only cause harm to our environment but also affects the patients who are suffering from lungs problem, Asthma, allergy etc. It also causes harm to the animals. Now a day’s government has introduced some rules to avoid firecrackers during Diwali in order to protect the environment from being polluted.

Long Essay on Diwali in English | Diwali Essay in 1000 Words

What is the first thing that comes into your mind when you think about Diwali? Lights, fireworks, colourful paintings, sweets and what not. It is an occasion when all the members of our family come together to celebrate the Diwali night.

Diwali can rightly be called as one of the biggest festivals of Hindus which is celebrated with joy and harmony not only in India but across the globe. Especially the kids look forward to this festival since they get to burst their favourite crackers and eat whatever they wish.

The festival of Diwali takes place during the month of October or November every year. It is celebrated exactly 20 days after the festival of Vijayadashami. Spiritually, it is significant for us because it represents the victory of good over evil. While celebrating the festival, people try to follow all the rituals. Few of these are decorating the houses with candles and diyas and worshiping Lord Ganesha and Goddess Lakshmi.

The festival of Diwali is associated with many historical as well as mythological tales. We will discuss a few of them here.

According to the Puranas, Goddess Lakshmi took birth on the day of the new moon during Kartik month. In several Hindu-dominated areas, this day is celebrated in the form of Goddess Lakshmi’s birthday by performing different rituals. People worship her during the evening time. Since she is regarded as the ‘Goddess of Wealth’ as well, therefore, the Hindus hold high regard for her.

It is the most widely accepted mythological tale regarding the celebration of Diwali. According to the Ramayana, Lord Rama returned to his kingdom of Ayodhya along with Mata Sita and brother Lakshman after spending 14 years in exile. To celebrate this occasion, the whole Ayodhya city was decorated with beautiful lights and colourful rangolis. People distributed sweets among themselves as well.

This ritual is strictly followed even today.

It is during the Diwali time when farmers start cultivating rice, especially in the South. Therefore, it is also regarded as the festival of harvest. Since India’s economy is mainly based on agriculture, therefore the day is a celebration time for the farmers and their families.

How is Diwali celebrated?

Diwali is a five day long festival. It starts with cleaning of houses and shops. Then people start decorating them. Whether it’s about washing the window curtains or cleaning the fans or painting the houses to discard those items which are old and unused – everything takes place during this time.

On the final day of Diwali, during the evening time, people start decorating their houses with colorful lanterns, diyas, candles, flowers and rangolis. They wear new dresses and worship Lord Ganesha and Goddess Lakshmi and distribute sweets and other eateries among friends and relatives. It is also an occasion for visiting friends and relatives & exchanging gifts with them. Nowadays, several residential societies organise Diwali parties where they invite every family irrespective of their religion, to celebrate.

Pollution as a Result of Diwali

Although Diwali is a festival each one of us enjoys irrespective of religion, but while bursting crackers in huge numbers, we tend to forget this fact that it harms our environment on a large scale. This process results in air, noise and land pollution. In many Indian cities especially in Delhi, it has been observed that after Diwali celebrations the air quality degrades to a great extent. This is responsible for causing many harmful diseases such as breathing issues.

Every year, the Government, health experts and environment experts issue an advisory stating that one should not burst crackers. Diwali minus crackers is a more beautiful festival where everyone can be seen enjoying it without any harm to the environment.

Celebrate Diwali in an Eco-Friendly Manner

Now that you know how hazardous it can be if you burst crackers during the celebration of Diwali, we all should stop doing the same next time onwards and find an alternate solution. What about switching to eco-friendly Diwali? Wouldn’t it contribute to the environment as well?

As an adult, it is responsibility that we ask the young generation to stop using crackers. The government should also ban the same and check their sale.

Those crackers which radiate hazardous gases should be immediately removed from the market.

We should celebrate Diwali with our near and dear ones in an eco-friendly manner. Crackers should be avoided at any cost. We should leave a healthy Earth for our future generations while maintaining the spirit of the festival.