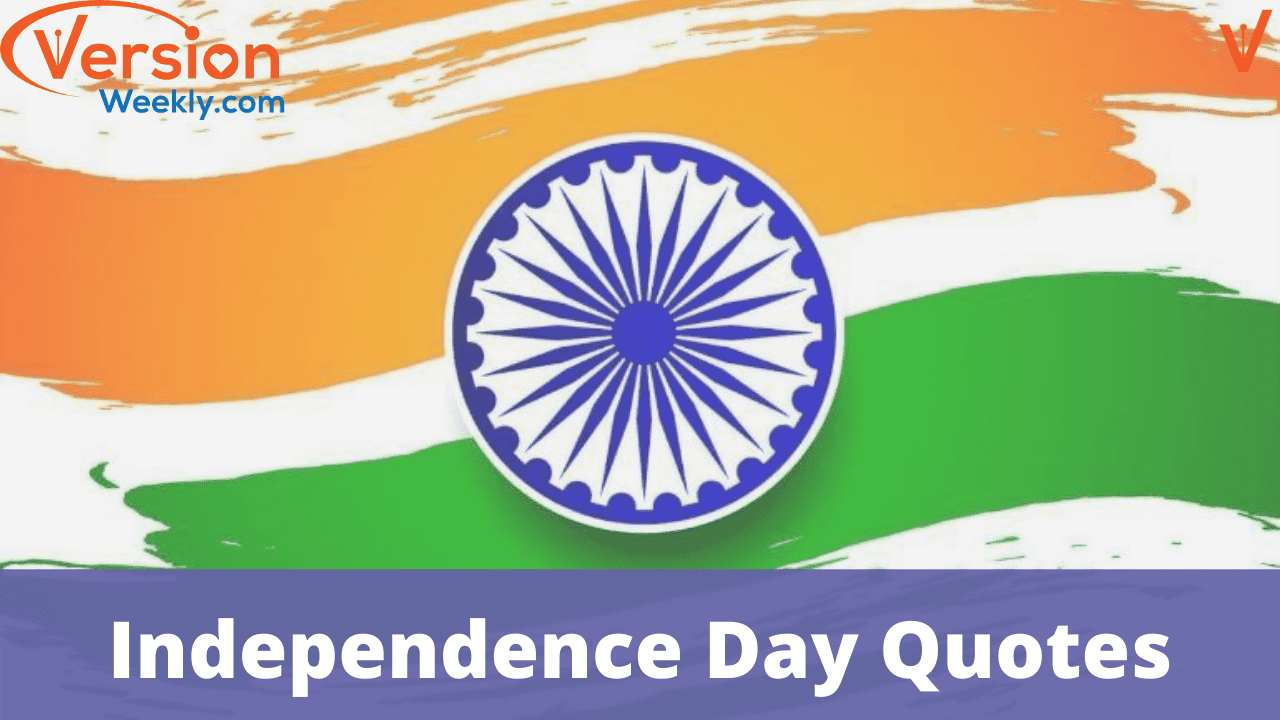 Independence Day is one of the rare occasions when the whole nation resonates with the spirit of nationalism and patriotism. It is a day to rediscover the glory of Indian freedom struggle and to reiterate the famous quotes of our freedom fighters. These quotes are sure to fuel the already existing feeling of patriotism in you and will make you reminiscence the courageous sacrifices of those brave men and women. Many great revolutions in history had started by an appropriate quote which fits perfectly in the situation. For such inspiring and wonderful quotes, read on.

We have listed below some motivational, inspirational and revolutionary quotes said by the famous personalities and legends on Independence Day of India.

“India conquered and dominated China culturally for 20 centuries without ever having to send a single soldier across her border!” – Hu Shih

“If I were asked under what sky the human mind has most fully developed some of its choicest gifts, has most deeply pondered on the greatest problems of life, and has found solutions, I should point to India.” – Max Mueller

“Long years ago, we made a tryst with destiny and now the time comes when we shall redeem our pledge… At the stroke of the midnight hour, when the world sleeps, India will awake to life and freedom.” – Jawaharlal Nehru

“Even if I died in the service of the nation, I would be proud of it. Every drop of my blood… will contribute to the growth of this nation and to make it strong and dynamic.” – Indira Gandhi

“At the dawn of history India started on her unending quest, and trackless centuries are filled with her striving and the grandeur of her success and her failures. Through good and ill fortune alike she has never lost sight of that quest or forgotten the ideals which gave her strength.” – Jawaharlal Nehru

“How can one be compelled to accept slavery? I simply refuse to do the master’s bidding. He may torture me, break my bones to atoms and even kill me. He will then have my dead body, not my obedience. Ultimately, therefore, it is I who am the victor and not he, for he has failed in getting me to do what he wanted done.” – Mahatma Gandhi

“Freedom has its life in the hearts, the actions, the spirit of men and so it must be daily earned and refreshed – else like a flower cut from its life-giving roots, it will wither and die.” – Dwight D. Eisenhower

“We owe a lot to the Indians, who taught us how to count, without which no worthwhile scientific discovery could have been made!” – Albert Einstein

“India has two million gods, and worships them all. In religion all other countries are paupers; India is the only millionaire.” – Mark Twain

“Freedom has its life in the hearts, the actions, the spirit of men and so it must be daily earned and refreshed – else like a flower cut from its life-giving roots, it will wither and die.” – Dwight D. Eisenhower

“Thy spirit, Independence, let me share! Lord of the lion-heart and eagle-eye, Thy steps I follow with my bosom bare, Nor heed the storm that howls along the sky.” – Tobas George Smollet

“For some days, people thought that India was shaking. But there are always tremors when a great tree falls.” – Rajiv Gandhi

“India is the cradle of the human race, the birthplace of human speech, the mother of history, the grandmother of legend, and the great grand mother of tradition. Our most valuable and most astrictive materials in the history of man are treasured up in India only!” – Mark Twain

“If there is one place on the face of earth where all the dreams of living men have found a home from the very earliest days when man began the dream of existence, it is India.” – Romain Rolland

“One individual may die for an idea; but that idea will, after his death, incarnate itself in a thousand lives. That is how the wheel of evolution moves on and the ideas and dreams of one nation are bequeathed to the next” – Netaji Subhash Chandra Bose

“We end today a period of ill fortune and India discovers herself again. The achievement we celebrate today is but a step, an opening of opportunity, to the greater triumphs and achievements that await us. Are we brave enough and wise enough to grasp this opportunity and accept the challenge of the future?” – Jawaharlal Nehru

“Fourscore and seven years ago, our fathers brought forth on this continent a new nation, conceived in liberty, and dedicated to the proposition that all men are created equal” – Abraham Lincoln

“He that would make his own liberty secure, must guard even his enemy from opposition; for if he violates this duty he establishes a precedent that will reach himself.” – Thomas Paine

“We on this continent should never forget that men first crossed the Atlantic not to find soil for their ploughs but to secure liberty for their souls.” – Robert J. McCracken

“This, then, is the state of the union: free and restless, growing and full of hope. So it was in the beginning. So it shall always be, while God is willing, and we are strong enough to keep the faith.” – Lyndon B. Johnson

“Mother, I bow to thee! Rich with thy hurrying streams, Bright with orchard gleams, Cool with thy winds of delight, Green fields waving, Mother of might, Mother free. Glory of moonlight dreams, Over thy branches and lordly streams, Clad in thy blossoming trees, Mother, giver of ease, Laughing low and sweet! Mother I kiss thy feet, Speaker sweet and low! Mother, to thee I bow.” – Bankim Chandra Chaterjee

“I believe that the civilization India evolved is not to be beaten in the world. Nothing can equal the seeds sown by our ancestors, Rome went, Greece shared the same fate; the might of the Pharaohs was broken; Japan has become Westernized; of China nothing can be said; but India is still, somehow or other, sound at the foundation.” – Mahatma Gandhi

“At the stroke of the midnight hour, when the world sleeps, India will awake to life and freedom. A moment comes, which comes but rarely in history, when we step out from the old to the new, when an age ends, and when the soul of a nation, long suppressed, finds utterance. It is fitting that at this solemn moment we take the pledge of dedication to the service of India and her people and to the still larger cause of humanity.” – Jawaharlal Nehru

“Our nation is like a tree of which the original trunk is swarajya and the branches are swadeshi and boycott.” – Subhas Chandra Bose

“Whatever difficulties we may face, we must never give up the quest for truth, which alone is God himself.” – Bal Gangadhar Tilak

“The essential thing in religion is making the heart pure. The kingdom of heaven is within us but only pure heart can see the ‘king’!” – Bhagat Singh

“We are Indians, firstly and lastly.” – B.R. Ambedkar

“Citizenship consists in the service of the country.” – Jawaharlal Nehru

“Let new India arise out of peasants’ cottage, grasping the plough, out of huts, cobbler and sweeper.” – Swami Vivekananda

“I feel that the constitution is workable, it is flexible and it is strong enough to hold the country together both in peacetime and in wartime. Indeed, if I may say so, if things go wrong under the new Constitution, the reason will not be that we had a bad Constitution. What we will have to say is that Man was vile.” – B.R. Ambedkar

“Constitution is not a mere lawyers document, it is a vehicle of Life, and its spirit is always the spirit of Age.” – B. R. Ambedkar

“Freedom is never dear at any price. It is the breath of life. What would a man not pay for living?” – Mahatma Gandhi

“Freedom is not worth having if it does not connote freedom to err.” Mahatma Gandhi

“Violent means will give violent freedom. That would be a menace to the world and to India herself.” Mahatma Gandhi

“A hero is someone who understands the responsibility that comes with his freedom.” – Bob Dylan

“The greatest gifts you can give your children are the roots of responsibility and the wings of independence.” – Denis Waitley

“Nothing is more precious than independence and liberty.” – Ho Chi Minh

“We must have constantly present in our minds the difference between independence and liberty. Liberty is a right of doing whatever the laws permit, and if a citizen could do what they forbid he would no longer be possessed of liberty.” – Charles de Montesquieu

“Originality is independence, not rebellion; it is sincerity, not antagonism.” – George Henry Lewes