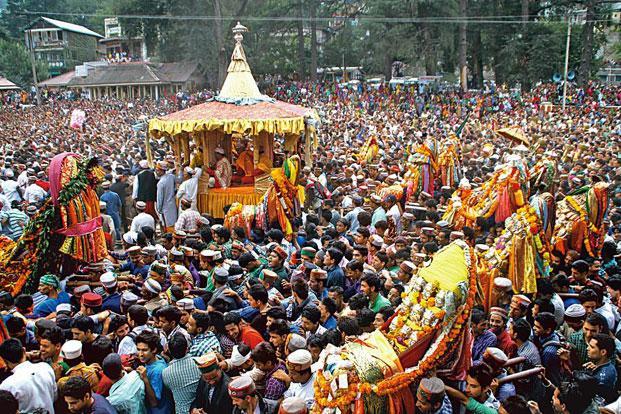 The beginning of Dussehra in Kullu dates back to the regime of Raja Jagat Singh who ruled Kullu from 1637 to 1672. There is a legend that Raja Jagat Singh of Kullu who had been informed that a bowl full of pearls was in the possession of Durga Dutt, a poor Brahmin of village Tipri. The Raja directed his courtiers to fetch the pearls from the Brahmin, was greatly harassed by the them. Finding the torture rather unbearable, he told them that the pearls would be delivered to the Raja on his return to the village from Manikaran where he was going. When the Raja arrived in the village, the Brahmin locked himself along with his family members and set fire to the house. Sitting by its side, he cut his flesh with a sharp blade at every leap of the fire and cursed the Raja for his unjust demand by saying “Have the pearls, O’ Raja”. The entire family was reduced to ashes.

After a laps of sometimes it so happened that the Raja was haunted by the spirit of the innocent Brahmin family, stung by the qualms of the conscience, he felt every moment the painful and tearing pinch of the strings and arrows of the deadly sin committed by him. Under guilt conscious and hallucination he used to see crawling worms in place of rice and human blood in place of water in the tumbler.

The Raja did whatever he could do but of no avail. The news of his illness spread throughout his kingdom and all possible means of curing his disease were explored by his courtiers, prominent hakims, vaids, doctors and religious persons saints etc. But nothing could stop Raja’s hallucinations. At last a Bairagi named Krishan Dutt (Pahari Baba) offered his counsel that no medicine can be effective to cure the Raja except the blessing of lord Rama. In this direction he further suggested that the Raja
should take charanamrit of an idol of lord Rama.

This idea struck sound in the mind of the Raja and further efforts were made to procure a holy idol from Ayodhya. His efforts succeeded in procuring a genuine idol from Ayodhya. For this work a disciple of Bairagi Krishan Dutt named Damodar Dass was selected and deputed for this purpose.

Damodar Dass had attained miraculous power known as ‘Gutka Sidhi’. Through this miraculous power he was able to procure the rare piece of Rama’s idol along with Pujari from ‘Tret Nath’ Temple of Ayodhya in July 1651 AD which was installed in Raghunathji’s temple at Sultanpur Kullu by observing all the rituals suggested by the learned priests of that time. It may be of interest to record here that a special class of priests were brought from Ayodhya to conduct the rituals and their descendants still continue to keep-up the tradition.

Raja Jagat Singh faithfully observed the suggestions of Bairagi Krishan Dutt and by and by, he showed signs of recovery from the dreaded disease. He was greatly influenced by the divine power of Rama, so much so that he abdicated his throne to the will of Raghunathji and became ‘Chharibardar’ of Raghunathji.

This incident had a great impact in his state and as a consequence thereof all the Devis and Devtas accepted the overall lordship of Raghunathji. The Raja spent his order to all the ‘Kardars’ of all Gods and Goddesses of the state to assemble at Kullu on the festive occasion of Vijya Dashmi to first pay obeisance to Raghunathji and then participate
in the festivities thereafter.