Dengue is a viral disease, transmitted by the infective bite of a particular mosquito known as Aedes Aegypti. Human being develops disease after 5 – 6 days of being bitten by an infective mosquito. It occurs in two forms: Classical Dengue fever also known as “break bone” fever and Dengue Haemorrhagic Fever (DHF) which is life threatening. It is very common after rainy season. It is highly contagious and spreads from one person to another through mosquito bites. It is widespread in tropical and sub-tropical regions.
It is a very common disease in India since last two decades. Dengue can affect everybody, irrespective of their age and gender. However, deaths are common amongst children during DHF outbreak. 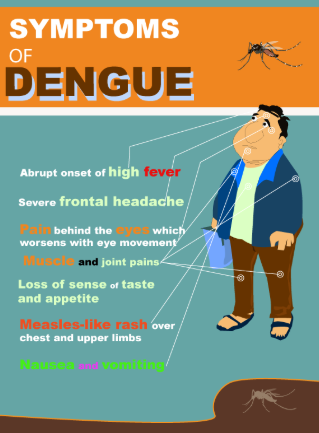 Symptoms of dengue are:

Dengue virus is an RNA virus. Transmission of this virus occurs in a cycle. An infected human is bitten by a female mosquito. The infected mosquito then bites another human, and the cycle continues.

MOSQUITO
Aedes aegypti mosquitoes most commonly bite at dusk and dawn, indoors, in shady areas, or when the weather is cloudy. They can bite and spread infection at any time of day and all year long.
The mosquitoes prefer to breed in areas of stagnant water, such as flower vases, uncovered barrels, buckets, water coolers and discarded tires. Some of the dangerous areas are wet floors and toilet tanks, as they allow the mosquitoes to breed in the residence.
Although the lifespan of an adult A. aegypti is two to four weeks depending on conditions, the eggs can be viable for over a year in dry state. This allows the mosquito to reappear after a cold winter or dry spell.

There are four serotypes of the virus that cause dengue (DEN-1, DEN-2, DEN-3 and DEN-4)

Some facts about Ades mosquito-

A probable diagnosis is based on occurrence of fever along with some of the following symptoms.

The diagnosis also takes into account whether the suspected person lives in endemic (high prevalence) area.

PRNT- Plaque Reduction and Neutralization Test (PRNT) and the microneutralization PRNT can be used to detect specific serotype of dengue virus.

Rapid diagnostic test: It is a method for specifically detecting anti-dengue IgG and IgM antibodies. The test can detect all four serotypes of dengue.

There is no specific medication for treatment of a dengue infection. Persons suspected of dengue can use analgesics (pain relievers) and avoid those containing aspirin. They should take plenty of fluids, rest and consult a physician at the earliest possible. If condition does not improve after 3-5 days, then one should seek further medical advice.

Do’s and Dont’s of Dengue 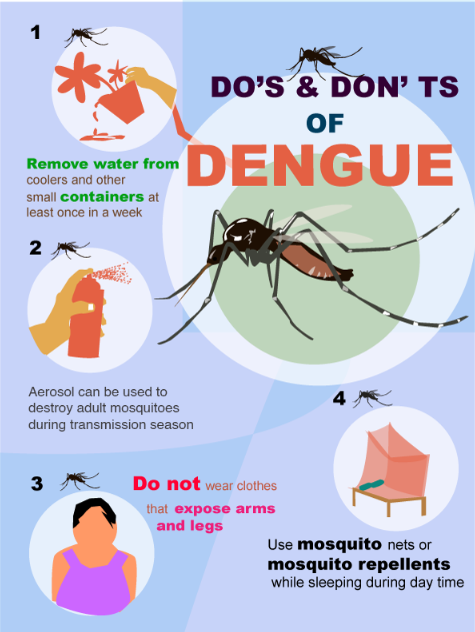 There is no vaccine to prevent dengue yet. The best way to prevent getting the disease is to avoid being bitten by mosquito. Some of the preventive measures are as follows: